ABOUT THE AUTHOR AND COLLEGE DIRECTOR

Frank Navratil BSc. N.D. was born of Czech parents in Vancouver, Canada where he completed a degree in 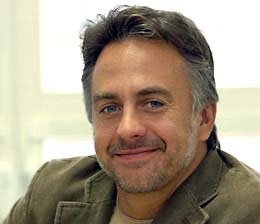 physiology and nutrition. In the 1990’s he moved to Sydney, Australia where he studied alternative medicine, iridology and clinical nutrition before practicing as a naturopath, iridologist, and clinical nutritionist. Since 1997, he has lived in Prague, the Czech Republic where he currently runs a natural therapy practice, writes and directs an international college offering courses in alternative medicine.

Frank has given countless lectures and has taught courses around the world on the subjects of iridology and nutrition. He has also appeared on several television and radio programs to talk about natural means of diagnosing and dealing with disease. He is the author of three natural therapy books, “For Your Eyes Only, “Eat Wise by Reading Your Eyes” and “Bowen Therapy,” which have been translated into several languages.

Based on his clinical research and over 30 years of experience with thousands of patients he has also written and designed the “For Your Eyes Only” series of Iridology courses, Holistic Nutrition and Bowen Therapy courses. These courses have been taken by medical doctors, health practicioners, natural therapists and laypeople the world over.

He has previously worked, too, in Ethiopia where he studied the effects of malnutrition and has cooperated with an Ethiopian Aid agency to fund the development of an Education Center for the prevention of disease there.

His European naturopathic practice over the past 20 years has been based on natural holistic methods that allow the body to heal itself. These include Iridology, clinical nutrition, vitamin and mineral treatment, Bowen Therapy, and diet and lifestyle changes.

Cooperation, exchange of ideas, common goals, respect for nature, equality and natural means of diagnosing and dealing with disease are words of the third millenium, the new millennium.

I have worked endlessly to write, design and create these iridology and nutrition related products, courses and educational resources so that I can share my experiences with you all. I sincerely hope they will enhance your understanding of natural means of dealing with disease. I wish you as much success and satisfaction as the rewarding career of natural medicine has offered me. ”